Conservative Talking Points about the WHO

Official Briefing from President Trump regarding the WHO (White House official fact sheet):

September 2020: Citing the WHO’s failures to implement requested reforms, the Trump administration announced it is

In an official letter from Trump to Dr. Tedros, the Director-General of the WHO, Trump explains his reasoning (full letter here, more information in timeline below):

Liberal Talking Points about the WHO

Senator Cory Booker on behalf of Senate Dems, 3 reasons why we should not exit the WHO:

Joe Biden: “[I will] immediately restore our relationship with the World Health Organization on Day 1, which — while not perfect — is essential to coordinating a global response during a pandemic”

Opinion Piece from the NYT Editorial Board (Quick read, very direct and packed with arguments against withdrawal and proposals for other solutions) Main Points:

Key proposals for improving the WHO:

Timeline of Actions from the WHO and the Trump Administration

December 31, 2019: WHO’s China office picked up a media statement by the Wuhan Municipal Health Commission on cases of “viral pneumonia” in Wuhan. That same day, Taiwanese officials sent emails to WHO asking for more information about “atypical pneumonia cases and patients who have been isolated”. These messages have been referred to as “early warnings about human-to-human transmission”, and although they did not provide any evidence that the disease was transmissible, they did question the validity of information from Beijing. WHO did not respond directly to the email.

January 5, 2020: WHO shared detailed information on the cases of pneumonia without a known cause, advising member states to take precautions to reduce the risk of acute respiratory infections.

January 9: WHO reported that Chinese authorities determined the outbreak was caused by a novel coronavirus.

January 11: The Chinese state media reported the first known death from the virus.

January 13: The first case outside of China was confirmed in Thailand.

January 14: WHO tweeted that there has been no clear evidence found of human-to-human transmission by the Chinese authorities.

January 20: The first American case was reported in Washington state.

January 21: President Xi Jinping allegedly pressured the WHO to not declare the coronavirus outbreak an emergency. The next day the WHO stated the coronavirus did not pose a Public Health Emergency of International Concern (PHEIC).

January 23: The Chinese government locked down Wuhan after 17 people were dead and more than 570 were infected.

January 30: The Director-General reversed the decision of a week prior and declared the coronavirus outbreak a public health emergency of international concern (PHEIC), which is WHO’s highest level of alarm. He also stated that China should be “the new standard for outbreak control”. Read his brief statement here. (it’s interesting to read knowing what we know now)

January 31: The Trump administration suspended entry into the US for those who had traveled to China in the past 14 days who weren’t a US citizen, family of a US citizen, or a permanent resident.

February 3: The WHO faces pressure from China to reopen travel. Dr. Tedros says the spread of the virus outside China was “minimal and slow” and that “the chances of getting this going anywhere outside China (were) very low.”

February 5: The Diamond Princess cruise ship quarantined off the coast of Yokohama. After passengers were tested, officials reported on Feb. 13 that there were 218 cases on  board.

February 11-12: WHO convened Global Research and Innovation Forum on the novel coronavirus, which was attended in person by more than 300 experts and funders from 48 countries and 150 joining online.

February 23: The number of confirmed COVID-19 cases in Italy explodes.

February 28: The first COVID-19 death in the US was confirmed in Seattle.

March 7: WHO issued a consolidated package that categorized existing guidance into four different transmission scenarios: no cases, sporadic cases, clusters of cases, and community transmission. Death toll rose to around 3,500 and infected cases to 102,000 in more than 90 countries.

March 13: The director-general of WHO announced that Europe had become the pandemic’s epicenter. Trump declared a national emergency.

March 19: China reported no new local infections. Italy overtook China as the country with the most deaths.

March 27: US became the country with the most confirmed cases, with 82,000 cases.

March 30: WHO had shipped approximately 2 million items of PPE to 74 countries and was working with partners to increase access to life-saving products.

April 7: Trump disapproves of the WHO’s handling of the pandemic. He publicly critiques the WHO’s “China-centric approach”, especially its recommendation to maintain open borders with China. Trump states, “The WHO really blew it. For some reason, funded largely by the United States, yet very China-centric. We will be giving that a good look. Fortunately, I rejected their advice on keeping our borders open to China early on. Why did they give us such a faulty recommendation?”

April 8: In a briefing, Tedros comments against the politicization of the virus.

April 15: WHO expresses regret over the halting of funding.

May 18-19: The World Health Assembly is held virtually. Delegates adopted a resolution that asked Tedros to initiate an impartial, independent, and comprehensive evaluation of COVID-19 response. This resolution was co-sponsored by more than 130 nations, making it the largest number on record.

May 18: Trump sends an official letter to the WHO outlining its mismanagement of COVID-19, as well as its lack of autonomy from China.

May 29: Trump makes public his intentions to “[terminate]” the U.S.’s relationship with the WHO and will be diverting funding from WHO projects.

June 5: Tedros advised workers in clinical areas of a health facility to wear medical masks, and the general public to wear non-medical masks where physical distancing cannot be maintained and in areas of widespread transmission.

July 6: The U.S. State Department formalizes its intent to withdraw from the WHO, which would go into effect in July 2021.

July 15: Pompeo claims that the WHO facilitated China’s covering up of the pandemic. “When you have an incident in your country that could potentially lead to a pandemic, you have an obligation to report that and to allow others to come in and help you be transparent about it. The Chinese Communist Party chose differently. They co-opted the World Health Organization to achieve that cover-up,” states Mike Pompeo in an event with the Hill.

August 6: The WHO asks the United States to reconsider its withdrawal from the WHO.

September 3: The State Department publicly announces on its website that the U.S. withdrawal from the WHO will go into effect on July 6, 2021 and its intentions to redirect funding to other UN assessments.

October 2: President Trump announced that he and Melania tested positive for COVID-19.

A Brief History of the World Health Organization

The World Health Organization (WHO) is the United Nations Agency responsible for matters of international public health. Its founding mission is “the attainment by all peoples of the highest possible level of health.”  It is headquartered in Geneva, Switzerland, with six semi-autonomous regional offices and 150 field offices worldwide, and over 7000 staff from 194 member countries.

Significant accomplishments include the eradication of smallpox, the near-eradication of polio, and the development of an Ebola vaccine. 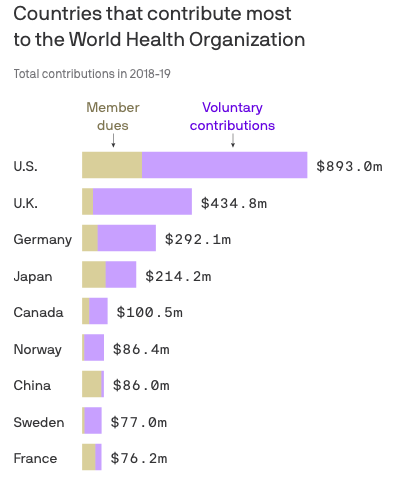 Financing: The chart shows WHO funding by country. The whole WHO has a bi-annual budget of $4.5B. Assessed dues can be used however the organization wants; voluntary payments are normally earmarked for specific activities. Bill Gates’s charity provides about 9% of the organization’s funding.

“Except for polio eradication activities, and for certain health emergencies, such as in areas affected by conflict in Yemen and South Sudan, WHO budgets are rarely spent directly on delivering health services or programmes. Instead, the money is mostly used to provide scientific and technical advice to governments.”

– Great (bipartisan) article on where the WHO receives and spends its money here. Does a great job explaining their day-to-day activities.

The agency’s governing body is the World Health Assembly (WHA), which is composed of one representative from each member country. It also has a handful of observing members (from the Vatican, the Red Cross, etc), of which Taiwan was one from 2008-2016. It was not reinvited after Chinese pressure, and there is an ongoing attempt to re-include them. The WHA meets annually in May to determine the policies of the Organization, appoint the Director-General (5 year term), supervise financial policies, review and approve the proposed programme budget, and elect an Executive Board of 34 health specialists.

“The WHO’s broad mandate includes advocating for universal healthcare, monitoring public health risks, coordinating responses to health emergencies, and promoting human health and well being. It provides technical assistance to countries, sets international health standards and guidelines, and collects data on global health issues through the World Health Survey. Its flagship publication, the World Health Report, provides expert assessments of global health topics and health statistics on all nations. The WHO also serves as a forum for summits and discussions on health issues.” –Wikipedia article on the WHO

Point is, the WHO’s activities are mostly centered around promoting international cooperation and providing a forum for discussing and sharing information. Aside from public statements, the WHO has no actual mechanisms to compel states to do anything specific; they can only provide recommendations.  Their power lies solely in giving advice, standard-setting, and research.

Regarding China: Here are two articles I found interesting that discuss China’s relationship with the WHO. New York Times article that is critical of the WHO and of China and Wired article that is defensive of the WHO but still calls for heavy scrutiny of Chinese influence.

The WHO’s investigation into the source of the virus has been subject to terms negotiated with the Chinese government. “Beijing approved a list of outside investigators. The WHO has agreed that key parts of the inquiry — about the first patients in China and the market’s role in the outbreak — will be led by Chinese scientists, according to documents obtained by The NYT. The documents, which have never been made public, show that W.H.O. experts will review and “augment, rather than duplicate,” studies undertaken by China.” It has not publicly disclosed the details of those negotiations. – Above NYT

“Mara Pillinger of Georgetown University’s O’Neill Institute for National and Global Health Law told the Washington Post, it is ‘politically tricky for WHO to publicly contradict or go around the Chinese government, because WHO needs to do everything it can to encourage stronger cooperation from China.’”   – Wired piece (from a liberal who accuses the WHO of being too biased towards China)